The Company of Strangers

Here is a blog post written in January 2013 which never saw the light of day - but it hasn't gotten any less relevant since I wrote it then... 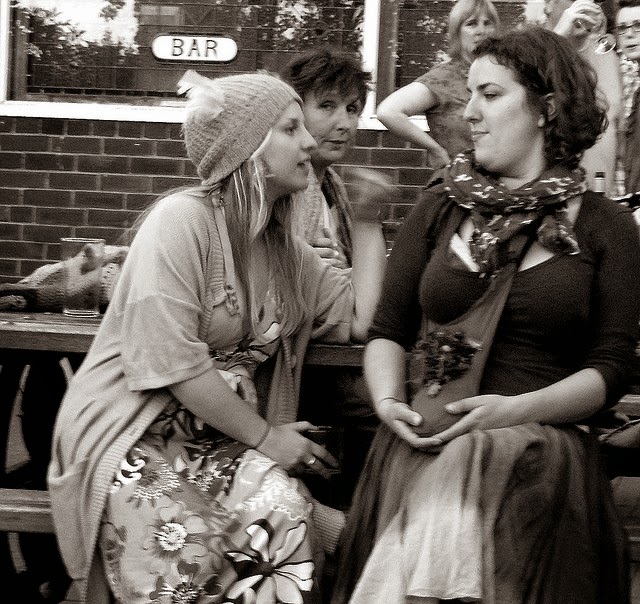 A few weeks back I’m drinking with some mates in a Glasgow bar on a Friday evening. After a couple of halves the others indulge my burning need to try the beer cocktails. I’m at the bar waiting while the anxious girl serving me (“Nobody ever asks for these!”) cautiously creates the outlandish drinks when a middle-aged guy next to me starts asking me what I think about ‘all this fancy beer stuff’. What he’s referring to is that we are in a BrewDog bar. That’s right – a bar in Glasgow where they don’t serve Tennants*. Essentially he is asking me if I think craft beers are worth all the fuss.

Well, I could talk about that one for hours. And this guy is polite enough. He’s not being creepy or pushy or making me feel uncomfortable. I’m just a little, kind of, put on the spot because I’m only there in Scotland to visit my mates and I want to get back to my table. Plus I am stood in the way of other people getting served at the bar and it’s busy in there at 5pm. But I’m interested in the topic of conversation and I don’t want to be rude - so we’ve been chatting for a few minutes when I feel a tug at my elbow. Initially I thought it could be a friend of this guy and I was being tag-teamed. But in fact it was our friend Jamie. So luckily, I didn’t elbow him in the face first and ask questions later.

A couple of weeks later I am at a beer festival at a greater London pub, a few miles down the road from where we live, that’s renowned for its beers. A key point to note about the pub is that it’s community-owned - it was all set to close down but some locals clubbed together and funded its continued survival. Somebody must have done something right as it was CAMRA’s Greater London pub of the year for 2012. It’s 6pm on a Thursday night and I’m stood at the small bar out of the back of this pub where the festival is being held, with the beer list in hand. I’ve just asked the barman if all the beers listed are on. Between him, myself and Chris, we are just discussing the order we should tackle them in, when I become aware of this looming presence to my right. I turn and see this big guy, who is swaying slightly, leaning against the wall next to the bar and intently watching me. I’m thinking: go away, drunkard. Also please stop staring at me.

So I say: ‘Oh, would you like to go first? Because I might be a little while...’ I give him a big friendly smile, thinking: please buy your drink and move on.
He says: ‘No. I’m just watching!’ *creepy grin*
I smile and say: ‘OK then’ and turn away to continue my discussion with the barman.
Random interloper guy interrupts us: ‘I’ll tell you which beer you should try if you want a REALLY good beer!’
Hmmm.  I say: ‘Oh yes?’
He names a collaboration stout which we've already had twice in the past week and we have Every Single Intention of sampling it again that night. But we planned on starting with the light beers and working toward the dark ones, hence we’ll get to that one later. I explain this to him.
He says: ‘No! You should have it NOW!’
I smile and say: ‘No, it’s OK, we’ll have it later’ and turn away.
He says: ‘DON’T WAIT. HAVE IT NOW.’
I ignore him. We purchase our beers, sit down and start tasting them. We note that it’s 6pm on a Thursday evening, the beer festival only started at midday, and there are an awful lot of loud drunken people in there. Are these loud people local residents who have invested in this pub? Or are they just people who have come here for the festival (albeit, getting started six hours before us)? To be clear: we think this is a lovely pub which offers a fantastic range of beers. We really like it there. I guess their beer festivals are just very popular and attract a lot of custom.

At this point I begin to muse on the whole concept of talking to (or sometimes at) strangers in pubs. Ever since I first started visiting pubs and drinking beer (20-odd years ago) I’ve held a soft spot for that camaraderie you get with strangers in pubs sometimes. I wonder if it is more of a noticeable concept in the UK (compared to the US, for instance) because for the most part we try pretty hard not to interact with strangers over here. I’ve always had a certain level of respect for that particular species of social interaction and I’ve always tried to be polite to strangers who have tried to chat to me in pubs (to a point, obviously).

While I was up in Scotland (visiting BrewDog Glasgow and so on) my friends and I were reminiscing about weekend away we had in Galway back in 2008 when we were in some grotty Irish pub where about 20-30 of us were sat in one long line of tables, like we were at Oktoberfest (except without any decent beer).  I always remember that day because of the trampy Catweazle guy who seemed really keen on chatting to some of us. My Scottish friend Fee wouldn’t have a bar of him and told him flat out to fuck off. But I felt a kind of empathy for the scruffy old bloke, like one day I might be a sad, old lonely drunk and be desperate for someone to talk to, and so I let him babble at me and hold my hand for a little while. It seemed to make him happy and it was a small cost to me... But it’s quite possible that Fee was right and I was just being a sap by tolerating the guy.

So all of these events have made me question the ‘right’ of a punter to accost strangers in pubs? Do you really have any more right to talk to someone and expect to get a response just because you’re in a pub and people are there to enjoy themselves? Or should people take even more care to leave you alone since you are ‘relaxing’ and are entitled to be left alone in your ‘leisure time’? Obviously there is a level where interacting with strangers becomes intrusive. Are we obliged to show ANY politeness to strangers when we are out having a drink? Is it different in your opinion to any other social setting, e.g. commuting to work or sitting in a park? Does it make a difference if you’re alone? Should it? Do you find this kind of ‘friendly’ social behaviour threatening? Does it annoy you? Or do you welcome it?

*please don’t be offended, Glasgow. I’ve visited quite a few of your bars and many of them do not serve Tennants or any ‘mainstream’ beers for that matter. In fact, Glasgow, I miss you and need to come back soon.
Posted by Emma at 00:35