Last Wednesday we had Withnail and I on while we had some friends over. The ‘perfumed ponce’ pub scene had me pondering the way people behave in pubs these days. Obviously we’ve moved on from a time when it was broadly acceptable to physically threaten someone in a pub for their perceived sexuality. 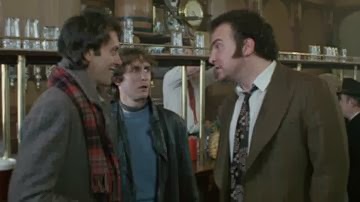 Last Thursday we visited a greater London pub. I realise now that prior to this visit we’d not been for a drink outside of central London for a few months. The pub was busy when we arrived about 6pm but we managed to grab the last empty table in a corner.

As we started unwinding after work and tasting/discussing our first beer we were both finding it difficult to ignore the loud conversation coming from the next table.  Two middle-aged guys were exchanging forthright views on the way they behave concerning their physical appearance, they being women. Apparently they care much more what their female friends think about their appearance than what their boyfriend does. Then they moved onto talking about going on holiday, with some cringeworthy Benny Hill-esque sexual innuendo. I was trying my best to tune this all of this out – because I wasn’t interested in hearing it and because we were trying to have a conversation ourselves. But the volume and the subject matter made it difficult to ignore.

There was brief respite from unsavoury topics when one of them received a phone call from their wife (about when their dinner was ready) which they put on loudspeaker so that everyone in the room could hear it. Finally, we were treated to some commentary on women’s names and the appearance/behaviour associated with each one, rounding off with:  'If they're called Sam, they're normally tasty. I mean, you might get the odd dodgy one, but that would be unlucky.'

After those guys left we had an extended discussion about appropriate behaviour in public places, and the difference between an objectionable conversation in the street/on public transport vs. In the pub. Do different ‘rules’ apply in a pub compared to in the street or on public transport? After all a publican can refuse to serve anyone at their own discretion, regardless of whether they have broken any laws.

My first thought was that if I witnessed this kind of unpleasant behaviour in my workplace I would be 100% certain that it wasn’t appropriate behaviour, that I shouldn’t be subjected to it, and that I’d report it. But then I know what my rights are with respect to behaviour in the workplace and I’m comfortable with exercising them.

But this wasn’t my workplace and it’s important to note that I wasn’t being personally attacked. None of that stuff was aimed at me directly (or indirectly); I was purely an incidental bystander on this occasion. But it was definitely making my experience, as a paying customer in that pub, less than pleasant.  I do respect the right of individuals to hold a private conversation in a public place and to express views I disagree with, or might even find offensive. My issue in this case is that they were doing it so loudly that it was disruptive as well as offensive.

So if you’re made to feel uncomfortable in a pub by the loud and unpleasant sexist remarks of fellow customers what action can you or should you take? What can you do in that situation other than vote with your feet (and your wallet) and simply drink somewhere else? I’m not a regular customer there so I wouldn’t expect the people managing the pub to prioritise my discomfort over the happiness of a regular (local) customer.

This experience has left me pondering if there is any realistic course of action available other than simply not drinking there again. One could argue that if nobody ever mentions to people like this that their opinions might be considered offensive by some (and that expressing them loudly gives a bad impression of that establishment) then they might never become aware of it and they’ll just carry on doing it... I’m not expecting them to stop being misogynistic dinosaurs – just to keep their voices down while they’re doing it so that other people who don’t appreciate misogynistic dinosaurs could also enjoy visiting that pub.

Am I at fault for not tackling this directly? Should I have mentioned it to a member of staff? I didn’t feel it was appropriate to confront these people, partly because I honestly don’t think there was any intent there to offend anyone, partly because I’m “not local”, and partly because I’d had a long day at work and all I wanted was a relaxing beer. But I keep questioning my decision to take no action at the time.
Posted by Emma at 00:44

Hi. I'm sorry to hear about your experience at the pub. I can understand you not wanting to confront the other customers, but this is not something you should have to tolerate. Why don't you actually name the pub? That way the pub owner/manager has the opportunity to respond.

Thanks, Rich. I did consider naming the pub in this post but decided on balance that it wouldn't be fair to them. I do like the pub and will probably return there. But yes, I would like to let the management know about my experience somehow. I think that would be fair. It's not necessarily required for that exchange to be done publicly though.

Really, my experience just made me ponder what is or isn't considered acceptable behaviour in pubs and I wanted to post something about that.