Craft Beer Rising: why do we go to beer festivals?


We didn’t attend this event last year, but we heard some (not so great) things about it from friends who did. Luckily for Craft Beer Rising the awfulness of London’s Brewing eclipsed every other 2013 London beer festival in terms of negative reviews.

This year we went to the afternoon session of Craft Beer Rising on Saturday 22nd February. The very first thing we did upon arrival was get a late breakfast from the Prairie Fire BBQ stall. It was delicious. Sadly, there is no photographic evidence of this as we were far too busy shovelling smoked meat into our faces (and washing it down with that well known breakfast drink, Beavertown Gamma Ray) to even think about taking a picture.

Once we were sated we were able to properly study the festival programme and attempt to pick out some ‘must try’ beers. Four hundred beers to choose from... To be honest, nothing really leapt out at us at first glance. We’d asked Chris Hall (who attended the previous day) for suggestions and he'd mentioned Firebrand Brewing so we visited their stall. I’m a sucker for rye beers so I jumped in at the deep end with a 7% Double Rye PA. It delivered everything I'd expect from its name and ABV. I tried to make it last and not get carried away (literally) too early on.

By this point we’d met up with Matt Curtis and Andy Parker and we busy chatting about beer, brewing, brewers and so forth. And I think this is where our beer festival experience began to go a little off course. Why were here again? Oh, yes, beer.

We happened to be standing near the American Craft Beer Company stall so when my glass was empty I wandered across for a sniff of their wares. This is a company which imports beers from the US to the UK. At CBR they had beers available from Stevens Point Brewery and Roscoe's Brewery. Strangely drawn to the pointy-headed standee mascot I asked to try the Point Black Ale. 'But what kind of black ale is it?' I asked. I was told to taste it and decide for myself. So I did. I should point out here that the beer was poured from a bottle stored in an ice bucket. I said the beer tasted of roasted malt and coffee and had a medium body...but that's it. When asked if I got molasses or caramel as well I replied, 'sorry, this beer is too cold for me to get any of that'. The response? 'But it has to be served cold because it's an American Craft Beer'. So all American Craft Beers need to be served at near freezing temperature regardless of beer style, eh? Interesting. For some reason I chose to buy a bottle of Point IPA after this and forced it on everyone.

Desperate for something to wash away the taste of stale imported US beer we visited the Celt Experience stall and sampled Brigid Fire, their magical smoked rye IPA, dry hopped with Nelson and fermented with a Biere de Guarde yeast. Yes. This is the kind of interesting beer I come to beer festivals for. 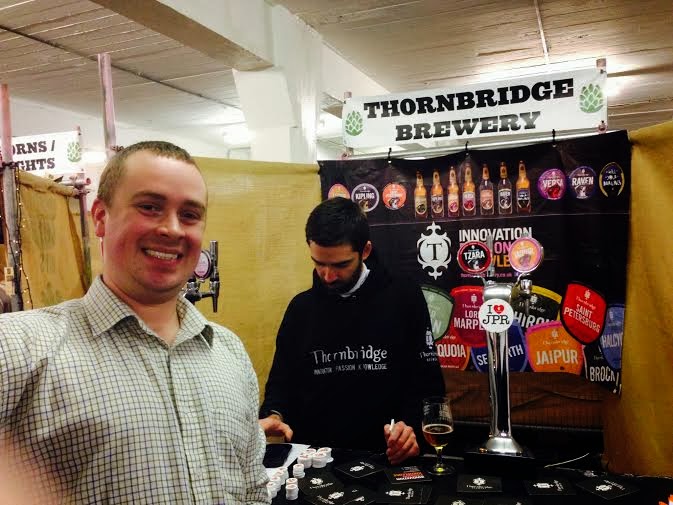 I think that after this we caved and hit the Thornbridge bar for a chat to Dom and a glass of Imperial Raspberry Stout. We first tried this at IMBC last year but I had somehow forgotten how terrifyingly drinkable it was. OK, yes, so beer festivals are all about great beer, right? But is it right that we buy tickets to attend a beer fest and then end up drinking beers we've had before? I'm not sure. So, why do we go to beer festivals? I'm still thinking about that one.

So let's try some new beer, right? Right! Next up it's another Chris Hall rec: the Spanish brewery, BeerCat. I try their Barcelona Blonde and it's alright. But this confuses me - because it was highly recommended but I'm just not feeling it. Sadness. Chris has the Further Westward, West Coast IPA. He really likes it. Some balance is restored. But, I'm still confused about how someone I know and trust thinks beer X is amazing yet I think it's just alright. It's happened before, but usually with more 'extreme' kinds of beer.

Let's have some more new beer. I bother the guys on the Late Knights stall about the pronunciation of their beers: PIPA is not pronounced 'pippa' OK? It just isn't. I won't have it. They still served me some. And I liked it. It's an easy drinking Polish IPA, brewed with Polish hops. 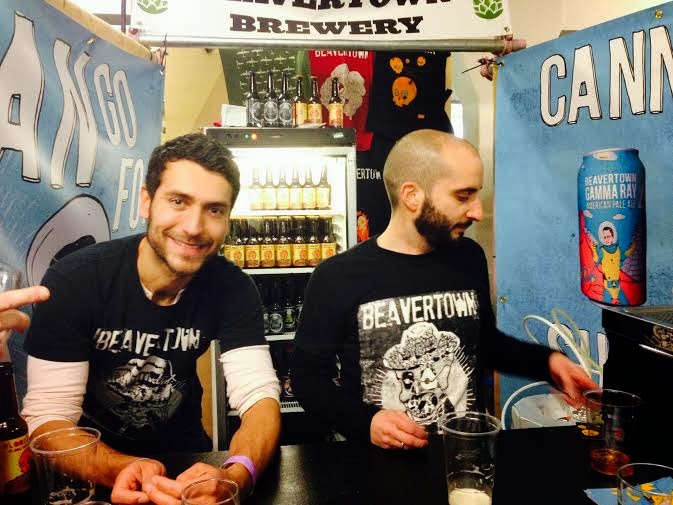 Bit fatigued with trying new beers? It can be tiring. Well, how about something new from a brewery that's an old favourite? That moment we've been waiting for all day will be put off no longer: it's time for the new Beavertown DIPA. When we arrive at the stall (again) Logan is there to introduce us to Jeremy, the new sales manager. We introduce Andy to the Beavertown guys and fortunately for everyone Andy has a bottle of his divine Lord Nelson with him, which goes in the fridge for sampling later. Hallelujah.

Back to that new DIPA - we're informed that it's a prototype on its way to one day becoming a DIPA at about 9%. Right now it's a US style IPA, at 7.3%. It's pale with big citrussy flavours and it has with a fairly bitter finish. To be honest I'll need to try quite a few more before I can reach a firm conclusion about it. More sampling is required. And then more Gamma Ray was had. I got VERY excited at discovering that the entire Beavertown core range is going to be available in cans soon, having previously thought it was only Gamma Ray (which was exciting enough already). SMOG ROCKET IN CANS! You know? Just saying... BLACK BETTY IN CANS! OMG! *flail* 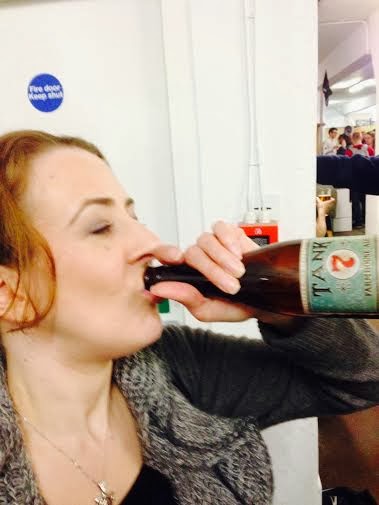 I'm also fairly excited about Beavertown hosting the London & SE homebrew competition at their new brewery in June. And did I mention their entire core range is going to be available in cans? I kind of peaked there to be honest. I had reached a point of giddy excitement about Beavertown which could not climb down from. OMG CANS. And then I drank some Tank 7 from a bottle like a total heathen just because I could. Don't try this at home, kids. I think we are due a 'sacrilegious craft bottle-swigging photo blog' at some point in the very near future.


If I'm giving you the impression that the highlight of CBR revolved around Beavertown then that would be pretty accurate.

However, since we went to CBR I've been pondering the concept of beer festivals per se. Why do we go to them? What do we expect from them? What is an essential component? What is lacking from some/all beer festivals? Why don't we just go the pub instead - can't we talk to our mates and drink beer without buying a beer festival ticket?

To summarise, we did enjoy ourselves and there really wasn't anything wrong with CBR.

So why did we end up feeling vaguely unsatisfied after CBR? Well, I think the big clue is that I actually drain poured two of the beers I bought at CBR. I cannot help making the comparison between CBR and IMBC. Every beer I had at IMBC was a great beer - there was zero drain pouring going on there. In every other category it just slightly edges out CBR. So why were our experiences so markedly different? Why was IMBC the best thing ever and CBR was just OK? I think it has to come down to the range and quality of the beers on offer. The focus of IMBC was beer. There were so many amazing beers to try that tasting those beers was more important than anything else. Yes, we socialised with friends old and new. Yes, we talked to each other. But really, we prioritised the beer above all else. That was the focus of each session and chatting to your mates was an incidental occurrence.

I'm thinking in hindsight that had we just gone to the pub instead of going to CBR we wouldn't really have missed out on anything. And we'd have saved ourselves the cost of the ticket. Yes, it's nice to talk to brewers we know and like, but we'll see them around anyway. Yes, it's nice to hang out and talk to our mates about beer, but we do that all the time anyway! So, I'm left thinking that we might be more selective about our choice of beer festivals in future.

Totally agree with your conclusions on this one - people asked me if I was going to CBR and I just didn't feel any enthusiasm towards it - my feelings seemed to centre on, why would I pay £10 entrance to get access to lots of beers I had had before, or would see elsewhere? It seemed like that £10 would be better spent at Craft or somewhere, on some genuinely new or one-off beers to explore. If the entrance fee had been cheaper then I'd have been much keener to go for the social aspects & chatting to brewers. Whereas for something like IndyMan and the Birmingham Beer Bash, I know I'll find lots of new-to-me, interesting, one-off or collaboration beers so I can spend the day exploring ales I wouldn't otherwise get my hands on (while as you say, having the social aspect as a side bonus). However I am planning to goto London Drinker, probably twice - my gut feeling is that I will find new beers, plenty of real cider too, and chums to talk to, for a lot less than £10 entrance.

Good to know it's not just me!

I feel like: 'what am I paying my entry fee for?' At IMBC I'm paying for access to INCREDIBLE beers that I don't want to miss any of. So, that's worth the price to me.