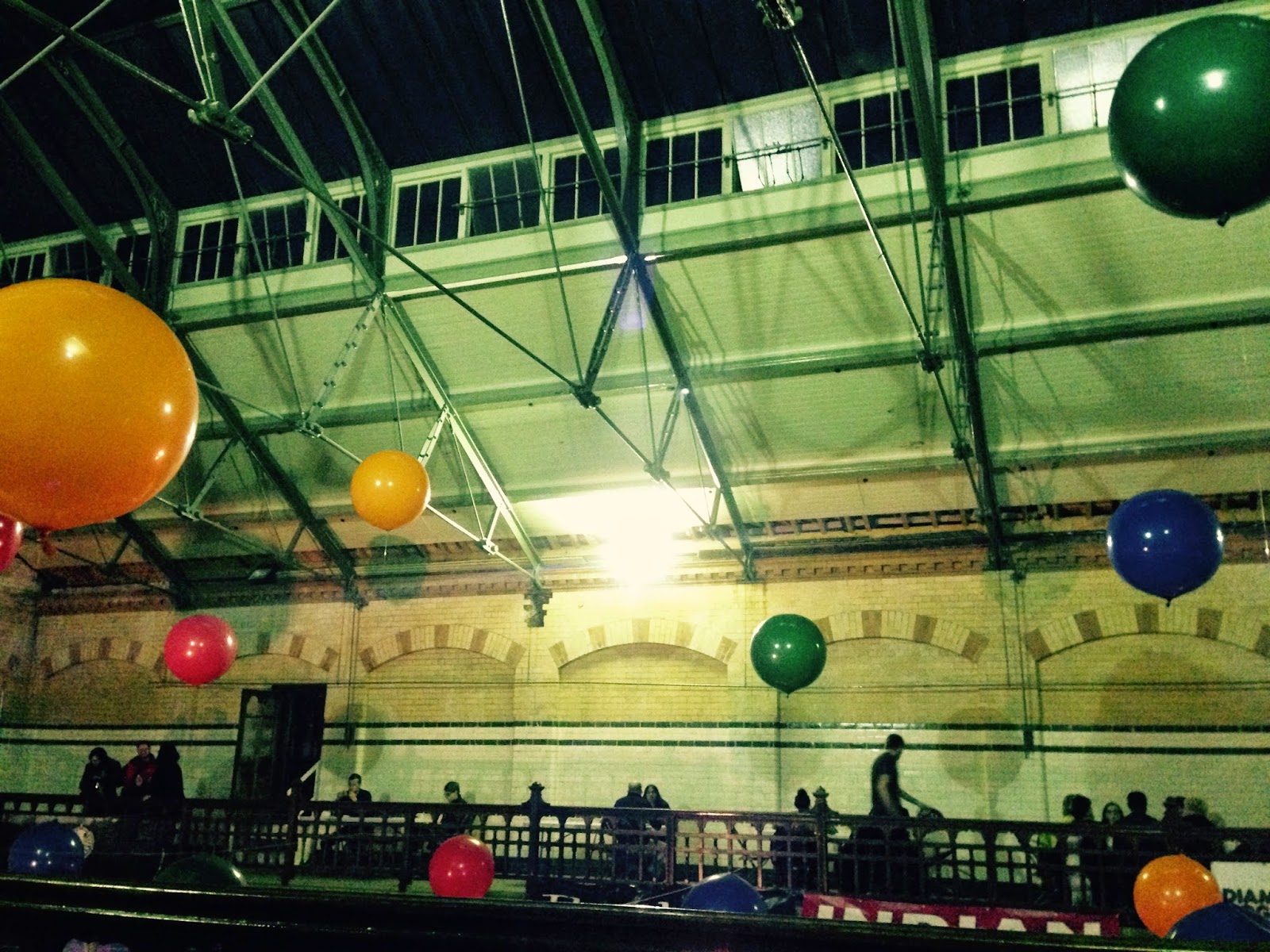 Last year we attended all the sessions bar one at IMBC. We had an incredibly positive experience there - the venue, the food, the beers (OH MY! THE BEERS!), the organisation, the people... so as soon as the tickets went on sale in April for IMBC14 we immediately booked for the full all-sessions experience. No way did we want to miss out on what, to us, was easily the best beer event we'd ever attended in the UK.
Read more »
Posted by Emma at 01:55 13 comments:

We were invited by Connor Murphy to take part in the home brewing panel at the Friday evening session of IMBC 2014. The plan was for each of the four homebrewers to introduce one of their beers and talk through how that beer was brewed, especially focusing on any processing problems and lessons learned, while the audience sampled the beer. We also planned if time permitted to have some discussion on the topic of judging beers... 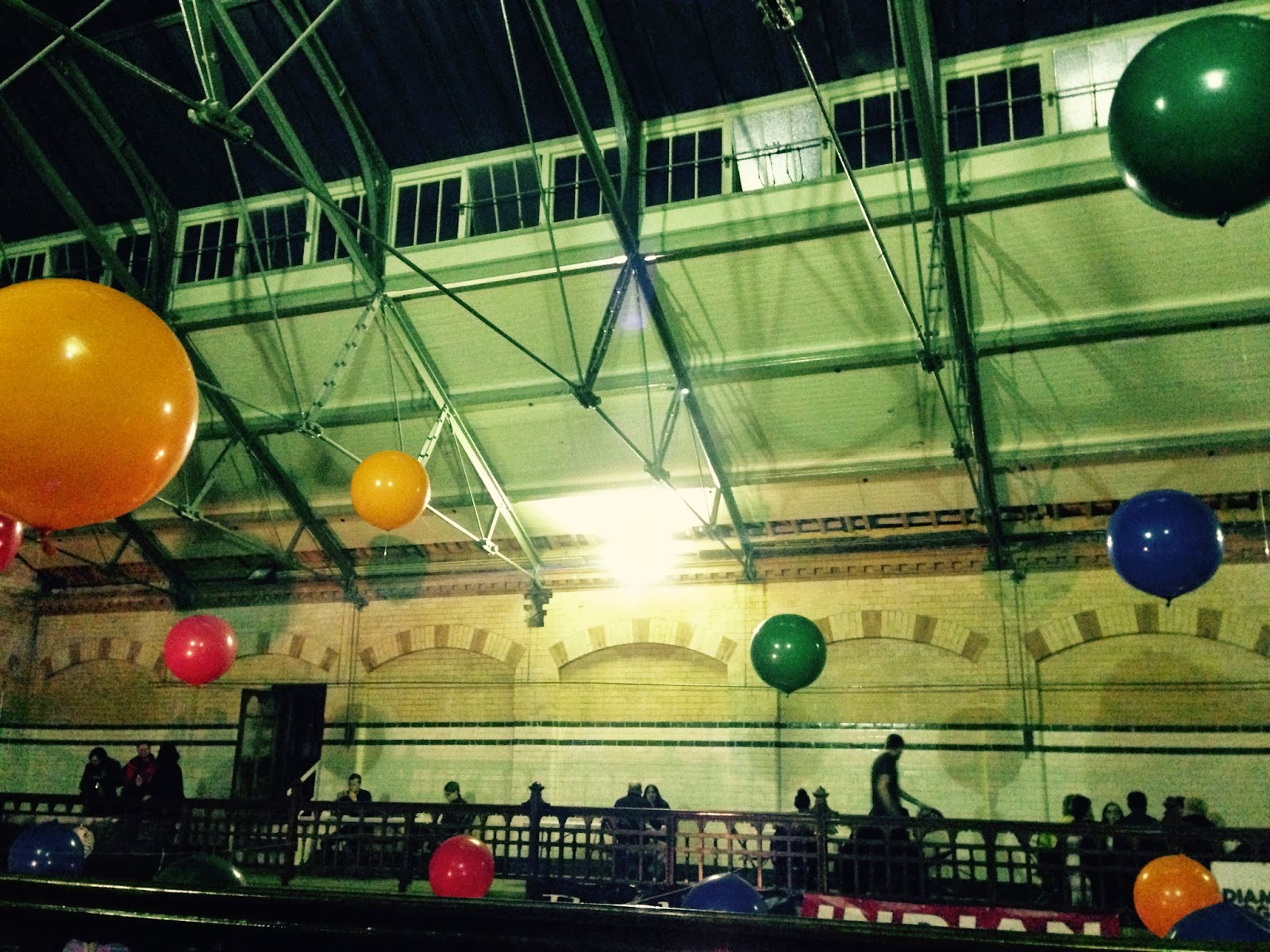 Beer as a food

It was a Sunday in June and we were nursing the faintest of hangovers from attending the BrewDog AGM the previous day. We needed a calm, peaceful atmosphere, comforting beer and restorative food. Luckily for us Six Degrees North was a short walk away.

This place is perfect in so many ways, from the wonders of its delicate and delicious in-house Belgian style beers to its soothing lighting and the absolutely ideal volume of the background music. But the most magical thing about Six Degrees North on this specific occasion was its beer and cheese soup, which arrives served in its own bread trencher. You need to eat this. Take my word for it. The word is amazing. Everyone should go there simply to try the soup, and that's before you even get round to their impressive beer list.

When we got home we were keen to make a version of this soup for ourselves. I trawled the internet looking for a suitable base recipe and settled on this one as a good starting place. Now here is my first pro-tip for you: select your beer very carefully. Over the years I've heard conflicting views on how to use wine in cooking. Some people say use any old thing because it doesn't matter and you don't waste the best stuff in food as you won't get to truly appreciate it. Other people say, don't put poor quality ingredients in if you want to make quality food. Personally, I have veered from one extreme to the other. For our first beer and cheese soup, I chose poorly. I figured it would be fine to use up some Dark Star Belgian IPA we had leftover from a case (which we'd been given as a prize in a brewing competition earlier this year). But, it wasn't fine. Not at all. Upon initial tasting of the soup all of the expected cheesy-herby-seasoning type flavours were there up front, followed by a slight bitterness (you just have time to wonder if this is from the beer), then WHAMMO! in the finish came the awful acetone tang across the tongue which poisoned the whole thing. That's right, I'd ruined my soup by using a beer that contributed an overwhelming taste of nail polish remover. It was an incredibly sad moment because it was clear that the soup would have been great if it had only been made with decent beer. Still, a vital lesson had been learned.

A few weeks later I came across this recipe (from Deschutes Brewery in Oregon) for Bacon and Beer Cheddar Cheese Soup and I needed to give it a try to exorcise the demons of the poisonous acetone soup. My second pro-tip for you: choose some fancy schmancy bacon. Those packets of luxury/wood-smoked/lovingly-somethinged-by-hand bacon that your eyes skim across in the supermarket before you pick up your usual pack: get that. Yes, that's right, you need craft bacon* for this recipe.

But which beer should you use? Well, it's up to you really. This particular recipe called for a golden ale but I used a pale (Adnams Ghost Ship) and it worked fine. Probably you could use whatever you like and you'll achieve mild variations in flavour depending on your choice of beer (in fact, it would be interesting to use a Belgian beer... but for me it's still too soon after the acetone soup). By all means experiment! However, please do not use out-of-date beer or, in fact, any beer which you would not happily drink a glass of; that road will lead to misery.

My third pro-tip concerns that all important element of the craft experience: blending. The original recipe doesn't call for any blending/liquidising of the ingredients. But again personal preference gives you the option of creating an ultra smooth soup or more chunky chowder - or anything in between. If you'd like it super smooth you could put the basic soup ingredients (onion, garlic, chilli, celery) into a food processor before frying them. If, like me, you prefer your soup to be generally smooth but a little on the rustic side then cook the vegetables, add the first portion of beer and the stock, then either give it a blitz with a hand-held blender, or if you don't have one, pour everything into a blender/liquidiser and give it a quick blast before returning it to the pan. Get it to the consistency you're happy with before adding your roux.

A couple of other handy hints - be careful about your conversions from US to UK measurements. The first time I used the Deschutes recipe I made a roux with 4oz of flour/4oz of butter. When I added this to the soup the entire thing insta-solidified, like a cheesy cement. Whether this is a positive or a negative depends on how thick you like your soup. With that much thickening power it's more like a chowder, which is nice if you like chowder. The next time I made it I used half as much for the roux (2oz flour/2oz butter) and it turned out much more like a soup.
Finally, I know it's a cheese soup. I love cheese, I really do... however, I think the amount stated in the ingredients list is an epic overkill. I put the full 4oz of smoked cheddar** but only about 100-150g of standard grated cheddar - I wanted it to be a soup not a cheese fondue. But I think you should all experiment and find a version that makes you happy.

If you like cheese and bacon and beer then you should probably make this soup right now. If you're feeling like a bit of a show off then have a go at making your own bread bowl, we did it the first time round and it wasn't so difficult. But it's equally good from an actual bowl. :)

*probably it will be just as delicious with standard bacon, but why take the risk?
**I found I couldn't grate my smoked cheddar - no matter just slice it up small, it will all melt once it goes into the pot anyway