This is a write up of the Northern Line pub crawl, we did in November 2012 and which Ems first published on her personal Live Journal blog back then. People have asked us about pub crawls around London since then, so we thought it was worth re-publishing it on our blog so people can learn from our experiences and avoid making the mistakes that we did. Enjoy!

After the success of the Circle Line pub crawl I thought we should do another. Searching for patterns and shapes I settled on the Northern Line loop: starting at Waterloo and heading around it anticlockwise. A couple of mates travelled down/up to join us: Ness from Glasgow and Slick from Bath, plus some locals.

I did try (for the sake of completeness) to record how long it took us to get round the course but unsurprisingly I didn't manage to keep it up the whole way. Likewise I tried to keep track of the beers I drank too. But you know what?  Just keeping this whole thing on track, let alone keeping detailed records of who did what when, took all my organising skills.

We arrived just after 10am to meet Ness for a tasty breakfast and essential caffeination. We were surprised to see Slick show up (from Bath) at about 10.30 - just in time for us to have our first alcoholic drink of the day. No REAL beer on sale here (they server tells us they’re more of a cocktail place) so we had prosecco instead. Then, even more shockingly, Deej arrives just as we are ready to set off. He has to grab his breakfast from a pasty stall at the station because we are not hanging around!

2. Kennington - The Black Prince 11.50am
A seemingly mile long detour takes us in a big loop to this surprisingly alright pub. Real ales aplenty here. I have a Harveys Best Bitter whilst sitting at a coffin-shaped table. Nice. Sadly there is NO HOT WATER available in the toilets here. Can’t wash your hands properly in cold water. Tut. Tut. 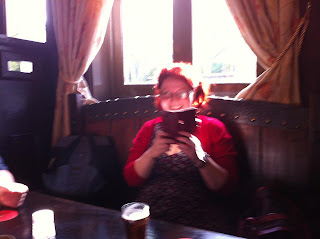 3. Elephant & Castle - The Prince of Wales 12.30pm
We consult the map and work out it's easier to walk to the next pub than get back on the tube, even though this part of south London is less than pleasant and I want to leave asap. I was pretty sure I was taking us to the same pub that a bunch of us (including Ness and Slick) visited after the Imperial War Museum back in 2006, but when we get there we realise it isn't. Oops. And it stinks of greasy fried food. We drink our diet cokes quickly. And leave.

4. Borough - The Royal Oak 1.10pm
Back to civilisation and a tried and tested pub. Hurrah They serve Harveys - I have a Sussex Pale. :). 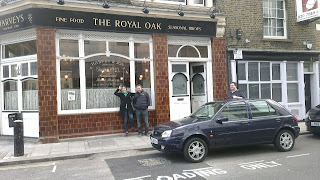 5. London Bridge - The Market Porter 1.45pm
Borough market, in case anyone may be unaware, is full of hipsters. Anywhere serving food or drink round here is rammed. To our surprise we manage to grab a table in here. I had a Fruli. I didn’t write on the table though. 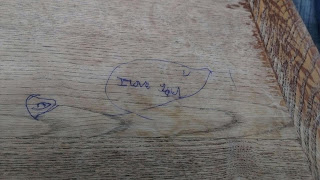 6. Bank - Ye Olde Watling 2.30pm
A pleasant walk across London Bridge. I’m smiling and thinking how much I love walking around this city. But when we get to The City I am compelled to say ‘F U, City of London!’. Again. I did my research for this one. I made sure I picked a pub that said it was open on Saturdays. But when we arrived, it wasn't open. Bastards. We found a different pub, which just happened to be a Nicholson's and therefore part of the seasonal ale trail we've been tackling recently across central London. I had a tasty Northumbrian Blonde. :)

7. Moorgate - The Old Red Cow 3.00pm
Kind of cheating for this one. We wanted to make a stop for food so we made sure it was in a great place for beer too. It took us out of our way a little but it was worth it. We really like this pub for its fine ales. I had some species of Kernal Pale Ale. <3 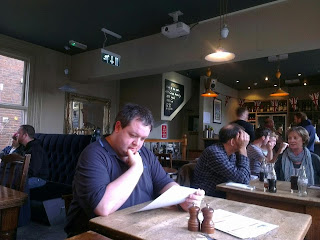 We said goodbye to Deej after this as he had a firework display to attend. But in exchange we picked up Jo at the tube station.

8. Old Street - The Masque Haunt 16.30
I asked a good friend from Islington to advise me of a passable pub near Old St. He said there wasn't one. So we thought we'd just hit the first one we saw, down a shot and get the hell out of there. It so happened that we spotted a Wetherspoons and thought that i) it would be cheap, and ii) we could take advantage of the other seasonal ale festival which is on right now. Unfortunately the selection of beers was poor – so Jo and I had a large Hendricks & tonic instead. This place also provided entertainment in the form of Waynetta Slob, who must live locally, swearing at her kids and shouting about the dessert menu. It was hard to look away but alas we had a mission to complete.

9. Angel - The York ? o’clock
We lost track of time a bit here as it was getting dark. I don't know Islington all that well, so this was a rec from the same friend who told me to avoid Old Street... Another Nicholson's pub (they're everywhere!) where I had a delicious American Pale Ale. :) Then it's back on the tube to the top of the loop.

10. King's Cross - The Post Room/Parcel Loft
This is a pub we attempted to use to complete the circle line crawl back in September but it had closed by 11pm. TUT TUT. It's actually not a bad place with plenty of room and quite fancy schmancy toilets. It’s a Fullers pub but I had a diet coke because I’m running this thing and have to keep my sensible head on. We picked up Paul here and discovered that he used to work at the same hospital as Ness in Glasgow before he started working in my lab. Small world, huh?

11. Euston - The Rocket
I've done quite a lot of drinking in this area over the years because it's pretty close to my work but I thought we'd check out a pub that some acquaintances have told me more than once is good... but it turns out that it's very average. Even the Euston Flyer is better than this place. I had another Fruli - because I find it hard to say no to strawberry flavoured wheat beer. :)

12. Warren Street - The Carpenter's Arms 18.55
Easy choice for this station. We visit this pub fairly often. Good choice of beers and wines. Nice food menu, nice toilets. A swift stop by our usual standards though.

13. Goodge Street - The One Tun
I always want to call this place 'the won ton'. It's an average pub but the lesser of a few evils in this street. Pretty sure I had a diet coke here but I slacked off a bit on recording the finer details at about this point. Lost Paul temporarily here as, like a hamster or other small rodent, he needs to eat on a regular basis and he'd disappeared off in search of sustenance.

14. Tottenham Court Road - The Jack Horner
A not very exciting pub. But as I work five minutes away I've had a few eventful evenings in here. The end is in sight now!

15. Leicester Square - The Garrick Arms 20.30
I’ve walked past this pub hundreds of times before but never been inside it. It is precisely as dull as I thought it would be! At this point Chris tests out the panoramic camera function on his new phone. It was quite funny at the time but even better the next morning when my seemingly melting face made me cry with laughter.

16. Charing Cross - The Harp
This pub continues to win awards but every time we walk past it it's mobbed. It's a tiny pub and people are always standing out in the road. We thought that perhaps on a Saturday night it would be quieter than during the week. Nope. It was rammed. Not sure how early you have to get to this place to get near to the bar. One day we'll find out. So we scratched this station and moved on to the next one.

17. Embankment - The Ship & Shovell
Another favourite pub of mine. Had been looking forward to the homemade pork scratchings here but they were sold out. :(  This is one of only two pubs where I've seen Badger beers on tap. We tried a new one 'Poachers Choice', which we didn't like much - it was all malt and no hop.

18. Waterloo - The King's Arms
A short trip across the bridge completes the crawl. We said goodbye to Slick here, bless him. He should really get a badge or something. This final pub was recommended to me by a colleague as being a really nice place. I'll have to ask her when I go into work on Tuesday if we were actually talking about the same King's Arms - because it really wasn't all that nice. Better than some of the places we'd been on this crawl. But it had been a long day and we were weary. We walked Ness back to her hotel and I then I was forced to go into yet another pub because I was desperate to empty my bladder and there weren’t any public toilets at the continual-state-of-refurb London Bridge station.

We slept the sleep of the just when we got home and then, much like last time, felt pretty wiped out the following day. Since we were sensible with our alcohol intake we weren't hungover (well, possibly a bit dehydrated, especially on top of Friday night's cocktails) but just really, REALLY tired.

Luckily we both had Monday off to recover (and go shopping for brewing equipment). I do enjoy the challenge of these things. Honestly. Otherwise I wouldn't take them on. But they are tiring to manage: both before and during. It helps having Chris to share the load. I also really appreciated having my tagging helper monkey (Ness) to document the day. :) If I were to organise another event like this I think I'd do something smaller. Anything else on this scale I think I'd do for just the two of us. But, all in all, a marvellous weekend and thanks to Ness for coming down especially to take part. <3