Brewing with the Beavers

A fortunate meeting at a 'beer and food pairing' event gave us the chance to visit one of our favourite London breweries: Beavertown Brewery. This is our tale of an early start, loads of hops, and getting a close up view of how the pros brew beer.

The story begins in early June 2013 when we spotted that Craft Beer Rising were having a series of Meet the Brewer evenings at Whole Foods Market in Kensington High Street. While there were other breweries featured that week that we'd be interested in, the one that excited us the most was Beavertown.

For those that know us, you'll know how much we love Beavertown beers. For those that don't: we fell in love with their beers from the first time we tried 8 Ball, their rye IPA. Shortly after that we visited their restaurant-cum-brewery tap, Duke's Brew & Cue, in Haggerston. Visits to Duke's have since become a regular feature in our social lives, with the option of delicious barbecued meat in the evenings or the always tempting American-style Brunch on weekends. Great food is always accompanied by great beers, either from Beavertown and or from a range of other great breweries. If you've yet to visit, what are you waiting for? If you like seriously good BBQ meat and an awesome beer selection then visit their website here.
About the beers themselves, looking at Untappd we think we've probably had almost all the beers they've made so far, apart from some of the one-offs they've brewed. So the chance to spend an evening with the Beavertown guys hearing them talk about their beers (while drinking them!) seemed like too good an opportunity to pass up.

When June 13th arrived Ems and I journeyed via separate routes to Whole Foods Market. Ems had a  tortuous trip (on top of a torturous day at work) left her ready for BEER! as soon as she arrived. Fortunately there was plenty of it available. Without going into too much detail and writing a whole post about that event itself, we were given a series of Beavertown's brews, each matched to a type of food. We are both love creating delicious food as much as we do beer, so it was a very interesting and enjoyable experience. Food and beer selection was excellent, with the Black Betty-Goats Cheese and Heavy Water-dark chocolate truffles being particular highlights.

While we drank our beers and munched our snacks, head brewer Logan Plant talked through some of the key features of each beer and mentioned some of the interesting back stories behind the beer. Also worth mentioning at this stage that we also had comedian/beer writer Ben McFarland along to talk about different aspects of beer and a bit of history and background to the different styles of beers we were drinking during the evening. 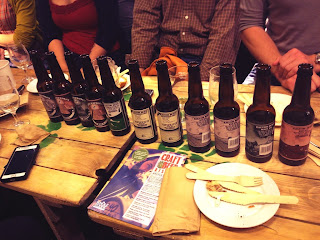 During the night, both Logan and his business development manager Byron Knight, mingled with the crowd to talk to people about the beers. We happened to mention to Byron that we loved their beers and were also keen home-brewers ourselves. This triggered an extended series of conversations about beer and brewing, where we described our own beers and talked about Beavertown's beers with both Logan and Byron which went well on until everyone was being asked to leave. Possibly we hogged them a little bit. Sorry about that.

Our chat finished up with an invite to come down to the brewery and maybe help out with brewing some beers. After an exchange of emails, we made plans to head down to Beaver Towers for a day in early July.

We agreed an early start because we're both early birds and we wanted to make the most of the day, learning about brewing on a bigger scale than a 19L batch. It was a bit of a trek from South London to Hackney, fortunately we're both seasoned London commuters and managed to figure the least painless route. On a side-note, Hackney Wick is quite a good destination for good beer right now, Beavertown, the newly re-established Truman's Brewery next door, as well as the "on our list to visit" Crate Brewery and Urban Sessions. Perhaps we'll give the latter two a visit now that our Great British BEER week (12-16 August) is over.

We located the industrial unit on Fish Island where Beavertown is housed - in the shadow of the Olympic Stadium. Well perhaps not quite in the shadow, but it certainly seems to loom over everything in the area. Outside the entrance was a man wearing a Beavertown T-shirt, smoking a hand-rolled cigarette. We introduce ourselves and explain that we're down for the day to see how things work and help out if we can. He introduced himself as Ben, one of the brewers, and then brought us inside to give us the tour.

Inside the brewery, we were immediately struck at how different it looked from the large, macro-breweries that we'd visited before. The front area is the packaging/warehousing area with all the boxed up bottles, keg kegs and some special beers just doing their thing in some whiskey barrels. The rear of the unit contains the brew-house with the mash tun, kettle and fermentors. No shiny metal glinting at you from all sides or a maze of pipework that runs from here and there. A mezzanine floor looms over the brewing area with storage for grains and hops, plus office space.

Ben shows us the mash tun; he's already mashed in the grains for a batch of Gamma Ray, Beavertown's American Pale Ale. We're particularly excited about helping out with this beer as it's recently zipped to the top of our favourite APAs with its great aroma of tropical fruit and well-balanced flavours of caramel and citrus fruits. When we ask Logan about it later, it transpires that they had to change the hop profile due to the reduced availability of the hops they were brewing it with originally. A change for the better we say. We were also validated in our inability to ID this beer in a recent blind tasting quiz round. :P

Ben puts us to work, measuring out the hops for each addition. What struck us was the sheer amount of hops going into a beer like Gamma Ray. We have to break up the large bales of hops to get what we need and then break each addition up further in the buckets so that they're not all clumped together when added to the kettle. By the end, we stink of hops but this is a good thing.

Ben then shows us how a larger scale lauter works versus the home-brewing scale. It's not that different, other than the use of pumps and hoses for recirculation and to move the wort from the mash tun to the kettle while a pump moves the sparge water into the sparge arm inside the tun. Before long, the lauter is complete and the kettle is on to bring the wort up to the boil. While that happens, we empty and clean the mash tun. This feels familiar, although we use a shovel for the spent grains rather than a large spoon, and a wheelie bin instead of a bin bag.
The boil, like in home-brewing is largely straight-forward. Hop additions at the right time, with some Protofloc tablets thrown into one of the additions to help encourage the proteins to clump together. However, a slightly more complex task to be done before the end of the boil is setting up the Clean-In-Place (CIP) kit. As home-brewers will know sanitation is absolutely key to making great beer, and for professional brewers it is absolutely essential so that beer doesn't get spoiled and have to be dumped, therefore costing a lot of money. The CIP kit works by circulating caustic detergent around the hoses, chiller and fermenter to kill (or reduce to inconsequential numbers) pretty much anything that could spoil the beer. The key thing is that you need to be careful around caustic. If you've ever seen a caustic burn (Ems has) you'll know that its very, very painful and will probably involve in a visit to the emergency room. And probably screaming +/- crying. We are cautious, though Chris willing sticks his gloved hands into a bath of it to sanitise them.

Once the boil is finished, the CIP kit is disconnected and the hoses are set up to transfer the wort via the chiller. We notice a big difference here in the use of a plate heat exchanger with plain old water running one way and the wort running the other - simply controlling the flow rate controls the cooling and soon the wort is running off into the fermenter.

Our involvement in the brew day isn't over yet. There's still all the hops to remove from the kettle. A thankless yet necessary task and it highlights how much of the brewers work is unglamourous and messy. Chris spends a seemingly l-o-n-g time scooping hops out of the kettle into a bin bag before Ben takes over to show him how it's really done. His technique is faultless and is obviously born of having to learn the hard way. The kettle is rapidly emptied.

Then everything has to be cleaned down. James, one of the other brewers, is coming in to make the other half of the double batch of Gamma Ray in the afternoon, so everything needs to be ready for him to start so he's not stuck in the brewery until midnight. We soon realise the folly of wearing trainers instead of boots... (at home we brew in our pants haha!)

We spend the rest of our time chatting to Logan, Ben and the other staff there about their beers. We also spend some time sharing drinking some of our own beers that we've brought down. Byron very generously describes our Red Snow Rye as being similar to Bear Republic's Hop Rod Rye. *blushing* We leave the brewery with some very kind gifts from Logan of soon to be released beers - their Barley Champagne Saison and the barrel-aged version of Heavy Water. Ben also gives us a couple of bottles of his home-brew, a kiwi fruit hefeweizen and a black IPA. Home brew swapsies make us happy. :)


It was a long day but very worthwhile for us. Big brewery tours don't really demonstrate how much hard work is involved in brewing beer on a big scale - spending a whole day like today does. We're both knackered by the time we get home. Has it discouraged us from pursuing brewing on a bigger scale? No way, but we're not in any danger of giving up our day jobs. But the question that we're still pondering is: could we do this part time? I guess you'll just have to keep watching this space to find out...

Thanks again to Logan, Byron, Ben and Phil for taking time out to show us the ropes. I'm sure we'll see you all around in the near future. In the meantime, keep on making awesome beers!
Posted by Emma at 11:28