It had to happen


I finally met a saison I didn’t love. 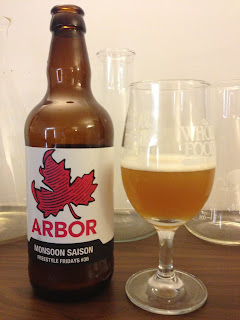 Yesterday we went out in the torrential rain to collect our beer and cheese from Good Taste Food in Crystal Palace. After we finished paying for the beers I spotted something on the shelf that I HAD to have: Arbor’s Monsoon Saison. I’ve seen lots of people saying good things about this beer and  I’ve never had an Arbor beer I didn’t like. More accurately, I’ve actively enjoyed every single Arbor beer I’ve ever tried. So it was with some determination that I said, ‘I ALSO NEED ONE OF THESE!’

This afternoon we bottled the second batch of our saison, Lunch Monkey, so naturally when it was time for the first beer of the day I was thinking about that bottle of Monsoon Saison. I’m a huge fan of saisons. I credit the style with being inspirational to us as home brewers – it was a homebrew saison we tried back in summer 2011 that really made concrete our desire to brew our own beers. Since then I’ve tried a great many saisons, from breweries both local and international. If my memory serves me well I’ve been enthusiastically positive about every single one*. Some, I have been positively giddy about (as some of you will know): special mention here to Partizan, and thanks to Andy Smith for answering my mails about adjuncts. :)

So, it’s time for Monsoon Saison: I’m excited. I’m reading the back of the label... it’s brewed with Experimental 366. Interesting - we brewed a pale ale with this hop a couple of months ago but, sadly, it didn’t turn out the way we intended it to. Shortly after that we tried Art Brew’s ‘Hip Hop Experimental 366’, a gorgeous pale ale; so beers brewed with that hop are of interest to us right now. But I read on: the brewers weren’t going to brew a saison because ‘every man and his dog has been brewing saisons lately’. I don’t really get that part. Lots of people brew IPAs...but I doubt that’s going to stop anyone brewing that style. If a brewer doesn’t enjoy a given style then I totally understand why they wouldn’t want to brew it. Why brew a beer you wouldn’t want to drink yourself? Saisons are easy to brew and they absolutely lend themselves to experimentation and variation on a theme. They are also very easy drinking beers, which lend themselves nicely to food pairing or just as an aperitif. It seems obvious to me why they are so popular. Surely there are lots of saisons around because they taste good, rather than because they are trendy? But what do I know?

Ok, so onto this saison from Arbor. It looks like a saison, there’s a fluffy white head on top of a pale amber, slightly hazy, beer. The aroma is where it gets interesting: all I smell is the spice (cardamom and coriander). A saison can be spicy in aroma and flavour but ideally that’s a subtle aspect of the whole. Here all I get is spice nose, no yeast and (weirdly, in hindsight) very little hop aroma. The taste is all HOPS!HOPS!HOPS!!!! with a background of spice. Still not getting much yeast character. Mouthfeel is as expected: light body, high carbonation,with a  refreshing dry finish. However, that finish is distinctly, lingeringly, bitter, more akin to an IPA than a saison. Where is the yeast? Is it hidden behind the hops and spices?

So, essentially, it’s a spiced IPA? I’m not saying it’s a bad beer. I liked it well enough to finish it and I’m not fussed about leaving beers unfinished if I don’t enjoy them. It just wasn’t what I expected. Maybe it’s a hybrid style: IPA:Saison? As an IPA I found it an interesting beer. As a saison, it would be the first one I didn’t hugely enjoy. But I still love you, Arbor. <3

*I’m going to reserve a mention here for Weird Beard/Elusive Brewing’s Nelson Saison, which again I had heard lots of good things about before I eventually got around to trying. The first time I tasted it was from a bottle, immediately after I’d had some Lunch Monkey. Thematically the two beers are very similar: saisons which are single hopped with Nelson Sauvin. However, while Lunch Monkey errs on the delicate side of hopping, Nelson Saison errs on the super vinous, tangy, fist-to-the-face side of hopping. I’ll be honest here; I didn’t really take to it on my first try. It was overwhelming. I just found that vinous quality TOO much. However, I wanted to give it the benefit of the doubt (having liked all the Weird Beard beers I’ve tried AND having enjoyed Andy Parker’s homebrew as well) and on keg it seemed like a different beast, better balanced. Maybe that was the extra carbonation, I don’t know. Anyway, on my second (and repeated attempts) I really liked it. It was just that initial intense blast of Nelson, when I wasn’t really expecting it, kind of tripped me up.