Are both equally important to you? Can you tolerate one without the other? We’ve had a few interesting experiences with customer service recently which have left us pondering those questions. 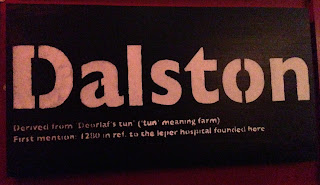 Back in February we were at Duke’s for a romantic feast of meat and beer. It was very busy that night. Service was a bit slow but always polite and friendly. Our delicious barbeque meat was perfect and so were the Beavertown beers. But the baked cheesecake we shared for dessert was a little bit overcooked and we couldn’t finish it.  That didn’t spoil our meal - it just made it less than perfect.

Afterwards Chris reviewed our experience on twitter and Duke’s responded. A polite exchange followed which resulted in us going back a few weeks later. We met the manager, Hannah, who shouted us a round on the house and stayed to chat to us about beer. We also got complementary dessert with our meal.

In my eyes this was a perfect resolution to a minor issue, far beyond what we had expected. It makes us even more likely to recommend Duke’s to every single person we know, which to be honest, we were already doing anyway. <3

On a rainy Monday afternoon in March we set off to visit Tap East for the first time. When we arrived there was a single customer nursing a pint in the corner. According to online reviews you can get ‘traditional pub food’ at Tap East so we arrived at lunchtime expecting to eat there. After a quick scan of the nearest food menu we headed for the bar for the important stuff: beer.

Now, I am a low maintenance woman, happier in 'spit and sawdust' pubs than swanky bars, and I don’t need a full-on, ‘HI! HOW ARE YOU DOING TODAY?!’ style greeting when I’m buying a drink. But what I do need is some sort of acknowledgement. There were two members of staff talking to each other behind the bar. We stood and waited for them to stop talking and acknowledge us but they just carried on. Eventually I said, ‘HELLO!’ in order to get some attention and one of the guys replied with, ‘Oh. Uh... Hello. Sorry, he was talking to me at the same time as you and it was confusing.’ 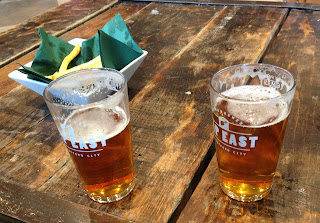 We ordered some food (even though it’s on their menu they didn’t have the ingredients for a burger so we made alternative selections) and a couple of beers. The food was brought out one item at a time (we ordered two dishes each) with delays between each delivery. Chris was disappointed by tameness of their Stoned IPA (I’d chosen a Brooklyn Brewery Black IPA “There Will Be Black”, which was great) so when he bought the second round he asked the bar staff which hops were used in the IPA. But they didn’t know because ‘they change them all the time’. That was a bit of a shame for a brewpub. We tried the other two Tap East beers (Elysian Peels and Tonic Ale) and then escaped to the Euston Tap. But hey, at least nobody was outright rude to us on this occasion. :)

Last week we visited a pub in Farringdon, which I’d been to once before. It does serve food but not between 3pm and 6pm. I was peckish for a snack so I asked the nice girl behind the bar what type of snacks they sold. The answer? Dry roasted nuts. Salted nuts. Some other type of nut. So what option is there for food between 3-6pm if you’re allergic to nuts (which I am)? Nothing. But I was still hungry so I requested some externally-purchased crisps, assuming it wouldn’t be an issue... silly me. Crisps can be perilous.

Prior to the arrival of the illegal crisps my friend spilled a bit of her beer on the table and went to ask for a bar towel to clear it up. A guy from behind the bar insisted on coming back to the table and clearing it (incompletely) for her. We cleared the rest up with a newspaper once he’d gone.

When all six of us were gathered and having a proper catch up and I was merrily eating my crisps the same guy came back to collect some empties. He told us, 'You’re only allowed to consume food purchased on the premises in here' (or words to that effect). Ok, fair enough. I thought that would be it, slap on the wrist, don’t do it again. So I didn’t bother explaining why I was eating food that wasn’t purchased on the premises. Chris felt the need to respond though and said, ‘Oh, sorry. I didn’t know...’ To which Angry Barman replied, ‘What, have you never been out before?!’ The six people seated round the table were all a bit flummoxed by this aggressive response. My beer-spilling friend pointed out, ‘we were all going to order our dinner from the pub menu soon’. To which Angry Barman replied, ‘Well, I made a polite comment and was greeted with rudeness.’ 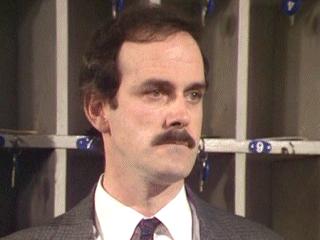 We finished our drinks and left a few minutes after this exchange. Naturally we posted a review of our experience online afterwards. Some of you may have read about that already.

There are plenty of pubs for beer lovers to choose from and no reason to remain in one with a poor attitude towards its customers.

Customer service is a priority for me. I don't care how good the food or drinks are if I'm made to feel like an interloper. Duke's sounds like it has its act together.

I pretty much agree. As consumers we have plenty of choice, there is simply no need to tolerate shoddy service.

Duke's was sorry to miss you. We must reschedule that trip.