The Best Double IPA in the UK

April has seen us drowning in double IPA. If you enjoy this style of strong, super hopped IPA then you’ve been spoiled for choice in the past few weeks. I’ve seen and heard a lot of beer nerds talking about which of them is 'the best DIPA'. Of course this is what beer lovers are into – discussion and friendly argument about beer. But I am surprised that people are still talking about this in terms of absolutes, as if one beer has to be awarded the title of ‘The Best’ and all the others must therefore be 'less good' beers. As if there isn’t a place for variation of expression within a style; as if context is irrelevant. By all means choose a favourite, choose one beer that you prefer above the others. But does one really have to be the best and the others all inferior to it as a result? I don’t think it’s that simple and I don’t really believe in absolutes.

Last week we sat down and drank seven different examples in one session in order to compare certain aspects of these beers. Well, technically it was only six I suppose - because we chose to include Brewdog Jackhammer (an IPA). And ok then, maybe it was only five actually... because one of them was a Kernel IPA. In truth, the purpose of that tasting session was to look at haze and clarity in UK IPA and we wanted to evaluate beers from a number of breweries (for more on this topic please see the next post, coming very soon). It just so happened that this exercise coincided with DIPA season so we were able to consider our original question and also to compare some fresh DIPAs at the same time. 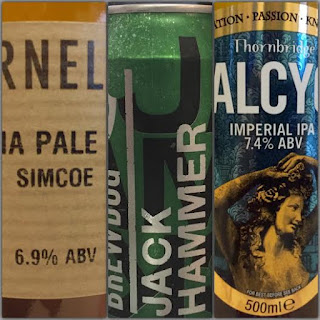 Here’s what we had on the night:


But before I get to the conclusions of that session let’s rewind to April 5th when I visited the Magic Rock Tap to help them celebrate their 5th birthday. Although I was very excited to try this year’s Unhuman Cannonball I thought I’d better not start the evening with an 11% triple IPA. Far more sensible to begin with a 9.2% double IPA, right? Human Cannonball is a very pale, almost washed out, yellow colour, and it moves beyond hazy into unashamedly cloudy territory. It is an unrelentingly bitter beer; sure it has a bracing citrus fruit hop flavour too but the overwhelming sensation at the beginning, middle and end was overt bitterness. This is not a criticism, it is a description. On the night it took me almost an hour to finish a third of it. Partly because I was deliberately taking it easy, partly because I was busy chatting to people, but mostly because it just isn't the type of beer you can guzzle.

Straight after that I tried the Unhuman and it was quite a different experience. It’s a shade of sunny orange, similar to the colour of mango juice and it has a definite haze (but it is not cloudy). The overwhelming feature of this beer is fruit: juicy tropical fruits like mango, papaya, and pineapple. The bitterness is dialled right down. It is not that the bitterness is too low, it is just intentionally in the background compared to the fruit juice hop flavour. There is, to me, no appreciable fusel alcohol character in there. The carbonation (thanks to their latest bit of kit) is absolutely perfect and you really do need the right level of carbonation to lift a big beer like this and to allow you to smell and taste everything the hops have to offer you.

These are two very different tasting beers, although they are the same style, made by the same brewery. So is one better than the other? No. Just no. NOPE. They are both great beers. Even drinking them one after the other (as I have done quite a few times already this month) they are still highly enjoyable and one does not ruin the experience of drinking the other. I understand that some people prefer a more bitter, bracing flavour in a DIPA, while some people prefer the softer, fruitier tasting beers. Which is fine, because you can choose to drink whichever one you prefer without one having to be The Best Double IPA.

ISN’T IT NICE TO HAVE A CHOICE THOUGH? 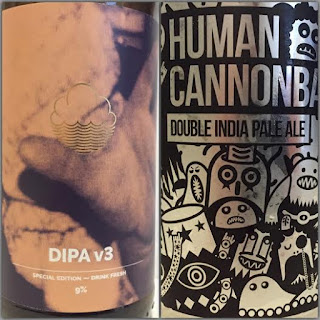 A couple of days after my trip north I tried the Cloudwater DIPA v3 back in London and my mind was a little bit blown. I had thought that Unhuman Cannonball was the pinnacle of fruity and softly bitter DIPA...but this beer took that concept further still. The Vermont ale yeast used by Cloudwater in this beer gives it a delicious peachy flavour note, contributing yet more fresh fruit juice character to the beer. These are both high ABV beers which conceal their strength very well indeed. Again, appropriate carbonation is required for a high ABV beer to fully deliver the potential of all those hops – otherwise else you’re selling yourself (and the hops) short.  I remain adamant that these two beers are thematically similar, although they were fermented with different yeasts.

Both the Human/Unhuman Cannonball and the Cloudwater DIPA v3 are seasonal beers and are only here for a short time. This makes them even more special to me and I have certainly done my best to fully appreciate them while they’re here.

Back to the seven beer tasting panel: what did we additionally learn from that experience that we didn't already know? Well, as always Halcyon is an outlier in this category, being so pale in appearance and clean in flavour. I’ve always loved it in its own right, never claiming it is better than any of the other UK/US DIPA I also enjoy drinking (NB: It's different, not better). So, that just leaves us with Buxton’s Kingmaker. The standout feature of this beer for me was its clarity – it was the brightest beer of the entire panel. Up against a Thornbridge beer and a Brewdog beer, that’s pretty impressive. The hop character of this beer is definitely a savoury one. It’s a hefty beast too and it does not attempt to conceal this from you. There’s a little bit of alcohol heat in there, which while acceptable at this ABV isn’t really to my taste. Not when I could drink Unhuman Cannonball at 11% and get no perceptible heat at all. Ultimately Kingmaker is just not what I’m after in a DIPA. But again – having that choice is great, isn’t it? 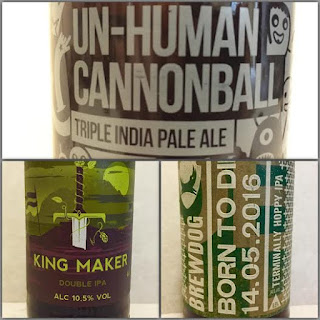 As well as those seven beers we also tried Brewdog’s Born to Die 14.05.2016 a few days later. I have to say that this was the best iteration of this particular beer. I felt ambivalent about the last version because I just could not get over that switch in aroma from that artificial fruity toilet cleaner to dank, wet cat as the beer warmed up. It was like two different beers in one, and not in a good way. I would say this Born to Die is actually quite swiggable. Sure, it’s incredibly bitter, but in a placidly approachable sort of way. I think you could drink a couple of pints of it if you had to because it’s kind of...unchallenging. Apart from the bitterness nothing really stands out about it. Certainly it’s the least punk of them all.

So is there a conclusion to be drawn from all of this sampling? Well, pretty much what I knew beforehand really: I can appreciate all kinds of well-made DIPA, whether they're brewed with 100% extra pale malt, or if they feature some character malts; whether they're dank and resinously sticky or bitingly dry. I might choose a different type of DIPA depending on context though. For example, at the weekend we ate quite a rich meal, featuring lots of cream and butter, and the bracing citrus bitterness of Human Cannonball was a perfect match to balance out all that richness. But I might choose a Cloudwater DIPA v3 as my first beer on a Friday night after a long week because it’s less challenging and its sunshiny fruitiness just makes me smile.

But, to come full circle back to the start: there is no best and there are no winners or losers. There’s just a lot of damned tasty, well-made beer waiting to be drunk and if you enjoy a DIPA then you should really have tried some or all of these by now. And if you haven’t then what are you waiting for?

I really enjoyed Human Cannonball (I think I said it's my "perfect beer" at the time).

That Cototpoxyl IPA or whatever tasted tannic and buttery to me - did not like.

Well, that's the million dollar question, isn't it. My next blog post should make clear my feelings on that matter.

I've decided I don't really like any of them. One of those things that as a bit of a beer geek you feel you ought to enjoy but having sampled most of them...nah not really. (Halcyon excepted). I found them all just a bit too much. Either too sweet, too much alcohol, too much fruit, too bitter.

I think that is the beauty of the beer scene right now, Rob. There is so much choice that we are able to say 'Actually none of these beers are to my taste, I'm just going to drink these other great beers instead' and we still don't feel like we are missing out.

I still think it's important to try things before dismissing them as bad. If you haven't tried something then your opinion doesn't carry much weight with me. It's the same as hearing a person discuss a film they haven't seen or a book they haven't read. :)

Like Rob I've tried loads of DIPAs and generally found they're usually too one dimensional for my tastes.

The best balanced and easiest drinking ones I've come across were Kees Bald Eagle and Siren Hillbilly Wine BA. Both well worth a second half.