We've had some thought-provoking experiences with judging beers recently, it's a bit of a recurring theme. 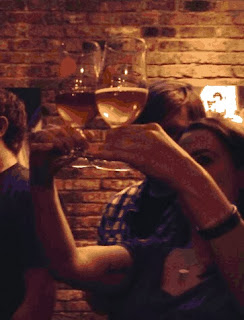 Our first experience of judging beer was perhaps a little clouded by the double IPAs (Flying Dog Double Citra was the culprit - but it tastes so good) we enjoyed prior to our first London Amateur Brewers (LAB) meeting at the Drafthouse at Tower Bridge.

On that occasion the club were choosing their nomination for a Belgian style beer to go forward to the inter-club competition against other UK home-brew clubs. First up was a general presentation on saisons and Bier De Garde with some excellent background information, as well as how saisons should taste; it's actually quite a wide spectrum in terms of flavours.

With this suitable preparation you'd think that the merry folk of LAB would be well placed to judge Belgian farmhouse style beers that night with informed minds. Sadly no. They went with a 'group feedback' session where everyone got to drink the beers and then individuals were asked to give their opinions to the whole group. Quite quickly it became clear that some people had little idea about what what 'dry' means when it comes to alcoholic drinks (for the uninitiated it means 'not sweet'). Saisons need to be dry in order to be refreshing: they were designed for quenching the thirst of farm workers. Another person who couldn't tell the difference between alcoholic heat and a spicy heat provided by peppers or chilies, which are both acceptable flavour elements (at low levels) for saisons. While it's not our place to judge others for their uneducated palates, we noted this scenario created an atmosphere where some people could influence the opinions of others, particularly those who appear to be knowledgeable or educated about beer. We'll come back to this point later.

We went back to LAB a few months later to attend the American Ale selection night. Again, an opportunity for the club to select a suitable American Ale-style beer (Pale Ale, Amber, or Brown) to put forward to the inter-club competition. This time the judging format was changed slightly with the larger group being broken down into 4 smaller groups (of about 10 per group). Our hopes for quiet independent judging were quickly dashed when it became clear that it would be a round table with everyone being asked in turn for their thoughts. Again what we have is the influencing opinions of others, witnessed first hand with people nodding sagely at comments made about the different beers, some points were valid and some absolutely ridiculous. At least at the end of the night, the best beer was selected (by a vote from the larger group overall) but it stuck in our minds how some people seemed to be repeating the same comments made by more experienced members of the club around the table, which then skewed group opinion toward the opinions which were voiced the loudest.

The splitting of the bigger group should have made some difference in terms of fairness but we felt there was more to be done in terms of educating less experienced members in how to judge beer properly and fairly.

Fortunately for us, we had a course on 'How to Judge Beer' a few weeks later (birthday present from Chris to Ems) taking place at The Bull in Highgate. This course was provided by the Beer Academy, part of the Institute of Brewing and Distilling, and was run by an experienced brewer who really knew his stuff when it came to beer (but less so when it came to controlling over-demanding participants). Sadly, while the course was useful in some aspects (the chance to sample negative flavours being one) it fell down in some areas. Too much time was spent on explaining the ingredients and the brewing of beer, rather than learning how to judge the positive and negative aspects of a particular beer in a judging scenario, such as a competition.

The key point we did take away from that experience is that judging should be done INDIVIDUALLY, at least initially. Everyone should be provided with the style guidelines for the particular beers they're tasting and a score sheet. Drink each of the beers in turn, using unsalted crackers to cleanse the palate after each, and write down your thoughts on the score sheet. Then when your individual judging is complete you report your findings back to the group and discuss what everyone's thoughts.

This set up for judging should deal with the problem of influence of stronger members of the group on others and encourage less experienced judges to stand their ground in terms of their opinion because it is their own opinion and not one formed by hearing what other (louder) people think.

Certainly at club level, consideration could be made for less experienced members being put into their own group and tutored by more senior members in what they should be looking for in the particular beers they're judging. Obviously, inexperienced members of the group need the opportunity to learn and gain experience at judging. That's really important. But maybe that should be a separate exercise to judging club competition entries?

We're looking forward to gaining more judging experience as it can only help us improve our own beers and spot any flaws, as well as continuing to learn more about beer.
Posted by Emma at 10:08